AZ Bathroom Remodeling: Showers are the trend for 2010 Part 1 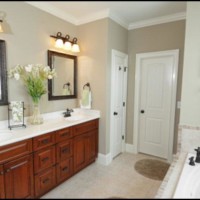 From AZ Bathroom Remodeling,one trend that is very clear for 2010 is the increasing importance of the shower. Traditionally, bathrooms have tended to be dominated by large bathtubs with everything else being of secondary importance.

Because more people are taking showers now, the dominance of the bathtubs has begun to fade.

Large spaces for showers now take centre stage and, with people choosing functionality over form, they are opting out of the clutter caused by large bathtubs, which are hardly used. They are getting rid of traditional bathtubs and replacing them with drawn bathtubs.

Multiple shower heads are trendy, and it is definitely nice to be able to shower together. Shower fittings are tending towards more gold and chrome and less traditional metal or plastic.

Also in are heated tiles so that you can say goodbye to cold bathroom floors. Instead you can install a tiled floor with an electric heating mesh beneath and a thermostat to regulate the temperature.

"We asked Bill to tile the whole house what we got was a brand new house. Our Local Company delivers above and beyond.-�
Ronnie P. " Peoria, AZ

"The work quality of the work exceeded all expectations even in our wildest dreams we didn't imagine the project would turn out this beautiful.-�
David V. " Phoenix, AZ